The Thirteenth Tale by Diane Setterfield 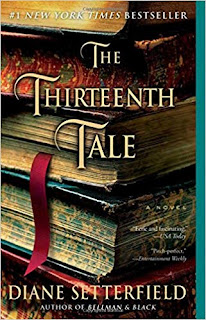 I just finished reading The Thirteenth Tale by Diane Setterfield. At first, it took me quite a while to get into this book. I got about a fourth of the way through and than it sat there, forever (well, maybe just a few weeks). I just didn’t have the motivation to pull through. Once I got over my hump, I sailed right through it and wasn’t able to put it down.
I was intrigued with the mystery. The Thirteenth Tale is Setterfield’s first novel, which in my opinion, is quite the feat. It felt as though Setterfield herself could be Miss Winter, the prolific author in the story. I won’t give up the ending, but I was quite pleased to realize the major twist in the end a few pages before it happened. I would definitely recommend this book to those who would like to rediscover the art of storytelling.
This book also renewed my interest in rereading many classics, as the story featured many “stories within the story.” Now added to my to be read pile for 2008 are Jane Eyre by Charlotte Bronte, Sense and Sensibility by Jane Austen, Wuthering Heights by Emily Bronte, and Emma by Jane Austen
Book Description
When Margaret Lea opened the door to the past, what she confronted was her destiny.
All children mythologize their birth…So begins the prologue of reclusive author Vida Winter’s collection of stories, which are as famous for the mystery of the missing thirteenth tale as they are for the delight and enchantment of the twelve that do exist.
The enigmatic Winter has spent six decades creating various outlandish life histories for herself — all of them inventions that have brought her fame and fortune but have kept her violent and tragic past a secret. Now old and ailing, she at last wants to tell the truth about her extraordinary life. She summons biographer Margaret Lea, a young woman for whom the secret of her own birth, hidden by those who loved her most, remains an ever-present pain. Struck by a curious parallel between Miss Winter’s story and her own, Margaret takes on the commission.
As Vida disinters the life she meant to bury for good, Margaret is mesmerized. It is a tale of gothic strangeness featuring the Angelfield family, including the beautiful and willful Isabelle, the feral twins Adeline and Emmeline, a ghost, a governess, a topiary garden and a devastating fire.
Margaret succumbs to the power of Vida’s storytelling but remains suspicious of the author’s sincerity. She demands the truth from Vida, and together they confront the ghosts that have haunted them while becoming, finally, transformed by the truth themselves.
The Thirteenth Tale is a love letter to reading, a book for the feral reader in all of us, a return to that rich vein of storytelling that our parents loved and that we loved as children. Diane Setterfield will keep you guessing, make you wonder, move you to tears and laughter and, in the end, deposit you breathless yet satisfied back upon the shore of your everyday life.
Reviews (from Bookmarks Magazine)
San Diego Union-Tribune 4.5 of 5 Stars
“It has elements that recall the classics: the extraordinary governess; the mad mistress; the adoration of siblings; a well-meaning doctor; interfering townsfolk; unwanted pregnancies; elopements; disappearances and returns; orphan children and mistaken identities; tragedy and evil and suspense. … Like a childhood favorite, it is timeless, charming, pure pleasure to read.” Julie Brickman
Philadelphia Inquirer 4 of 5 Stars
“Fictional narrators tend to be ghostly figures, and Margaret is ghostlier than most, but that may be because Vida Winter remains so incandescently alive, even though she is old and her life is drawing to its close. … Those who buy and read this complex, compelling and, in the end, deeply moving novel are unlikely to feel they’ve been shortchanged.” Frank Wilson
Rocky Mountain News 4 of 5 Stars
“This is a book-lover’s novel, with rich characters, fascinating plot twists and plenty of secluded moments infused with the soothing smell of cracking leather and old paper. … The Thirteenth Tale is a smart, thoughtful look at truth and deception: While uncovering personal truth is often unsavory, it can ultimately help draw us closer to the essence of who we really are.” Jennie A. Camp
Boston Globe 3.5 of 5 Stars
“This debut novel gets a lot of that rich bookishness right, heavy on the gothic detail and romantic suspense. … A few more hints, a little more basis for the ending, wouldn’t have spoiled this mystery.” Clea Simon
Washington Post 3 of 5 Stars
“Setterfield’s erudite novel amounts to a sort of brainteaser, a literary riddle to occupy the mind rather than a new vision to inform it. … And yet, for all its successes—and perhaps because of them—on the whole the book feels unadventurous, content to rehash literary formulas rather than reimagine them.” Margaux Wexberg Sanchez
Los Angeles Times 1.5 of 5 Stars
“The Thirteenth Tale explicitly sets out to capitalize on our longing for a good old-fashioned read but fails to deliver on precisely that. … Although [it] is nothing like either of the Brontës’ masterworks (despite being set in Yorkshire), it’s odd that the one Setterfield keeps invoking is not Wuthering Heights, which at least also deals with fierce, quasi-incestuous passions, but Jane Eyre, with which her book has even less in common.” Merle Rubin
Reading Group Guide(from www.thethirteenthtale.com)
Watch out! Reading the following guide will allude to key plot details. Proceed with caution!

Much of the novel takes place in two grand estates — Angelfield and then Miss Winter’s. How are the houses reflections of their inhabitants?As the story unfolds, we learn that Margaret and Miss Winter are both twins. What else do they have in common?Margaret and her mother are bound by a singular loss — the death of Margaret’s twin sister. How has each woman dealt with this loss, and how has it affected her life? If her parents had told her the truth about her twin, would Margaret still be haunted?Books play a major role in this novel. Margaret, for example, sells books for a living. Miss Winter writes them. Most of the important action of the story takes place in libraries. There are stories within stories, all inextricably intertwined. Discuss the various roles of books, stories, and writing in this novel.Miss Winter asks Margaret if she’d like to hear a ghost story — in fact, there seem to be several ghost stories weaving their way through. In what ways is The Thirteenth Tale a classic, gothic novel?Miss Winter frequently changes points of view from third to first person, from “they” to “we” to “I,” in telling Margaret her story. The first time she uses “I” is in the recounting of Isabelle’s death and Charlie’s disappearance. What did you make of this shifting when Margaret points it out on page 204?
Compare and contrast Margaret, Miss Winter, and Aurelius — the three “ghosts” of the novel who are also each haunted by their pasts.
It is a classic writer’s axiom that a symbol must appear at least three times in a story so that the reader knows that you meant it as a symbol. In The Thirteenth Tale, the novel Jane Eyre appears several times. Discuss the appearances and allusions to Jane Eyre and how this novel echoes that one.
The story shifts significantly after the death of Mrs. Dunne and John Digence. Adeline steps forward as intelligent, well-spoken, and confident — the “girl in the mists” emerges. Did you believe this miraculous transformation? If not, what did you suspect was really going on?
Dr. Clifton tells Margaret that she is “suffering from an ailment that afflicts ladies of romantic imagination” when he learns that she is an avid reader of novels such as Wuthering Heights, Jane Eyre, and Sense and Sensibility. What do you think he means by drawing such a parallel?
What other parallels exist between The Thirteenth Tale and classic 19th century literature?
When did you first suspect Miss Winter’s true identity? Whether you knew or not, looking back, what clues did she give to Margaret (and what clues did the author give to you)?
Margaret tells Aurelius that her mother preferred telling “weightless” stories in place of heavy ones, and that sometimes it’s better “not to know.” Do you agree or disagree?
The title of this novel is taken from the title of Miss Winter’s first book, Thirteen Tales of Change and Desperation, a collection of twelve stories with a mysterious thirteenth left out at the last minute before publication. How is this symbolic of the novel? What is the thirteenth tale?
When do you think The Thirteenth Tale takes place? The narrator gives some hints, but never tells the exact date. Which aspects of the book gave you a sense of time, and which seemed timeless? Did the question of time affect your experience with the novel?

The Thirteenth Tale by Diane Setterfield

I just finished reading  The Thirteenth Tale  by Diane Setterfield. At first, it took me quite a while to get into this book. I got abou...